Things Were Better Before

Things Were Better Before is a movie that participates at the TGIFF festival in the Final Cut Selection. 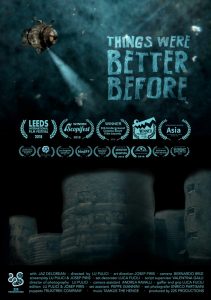 Summary: Tankus the Henge and Trukitrek Puppet Company have dreamt up an animation that is both beautiful in it’s design and poignant in its message dealing as it does with environmental issues, specifically the death of our oceans. The film, made entirely using found or recycled materials, is a “Wake-up Machine” to those who view it, encouraging green and sustainable thinking to a society which needs to pay attention and affect real change before it’s too late. 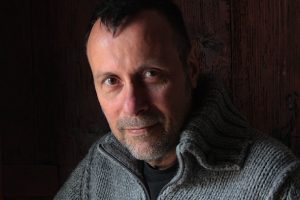 Director Biography: Lu Pulici was born in Descalvado, Brazil in 1963 and lives in Pennabilli , Italy. He qualified as an architect by the Catholic University of Santos, Brazil, and graduated as a film director by the Centre d’ Estudis Cinematogràfics de Catalunya, Barcelona, Spain. From 1993 to 2001 he worked in the Spanish film industry as Art Director, working for various productions, both short films to feature films. In 2013, after 12 years fully dedicated to the theater productions, he returns to the world of cinema, creating the independent cinema group Lumaca Film. In 2015 he founds his own film production house 22S PRODUCTIONS.